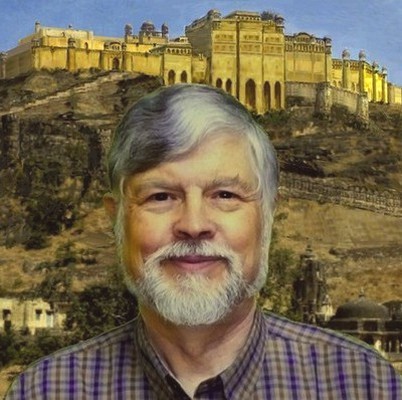 Gary Worthington has been an enthusiastic reader of historical (and other) fiction for most of his life. His own award winning epic historical novels are unique in depicting major events and figures in India’s history, from ancient times through the 20th century. His books include:

He has traveled widely on the Indian subcontinent and in many other countries of Asia, as well as in Europe and South America. His articles have appeared in Traveler’s India magazine, on the Writing Historical Novels web site, and elsewhere. He was an invited panelist at the South Asia Literary Festival in Washington, D.C.

In his legal career, he has been a lawyer in private practice, for the Washington State House of Representatives, as an officer in the U.S. Navy, and more recently helping develop the unique Cama Beach State Park on a historic waterfront resort site formerly operated by his wife Sandra’s family on Camano Island, Washington.

His wide range of interests include personal spiritual growth, graphic arts, the night sky, and reading; and issues such as international economic justice and environmental preservation. He designed the home he and his wife live in, on a forested site near Olympia, Washington.

Gary and Sandra recently established the Cooper Point Nature Preserve on a 39 forested acre site by their home.

They also operate a private foundation which funds primary schools in India and other projects to help people become economically self-reliant.

The books are available from these sources:

India Treasures: An Epic Novel of Rajasthan and Northern India through the Ages

India Treasures is also published in India by Penguin India, under the title, The Mangarh Chronicles

In this monumental work of fiction covering the sweep of Indian history, a search through palaces and a maze-like fortress for a Maharaja’s legendary hidden treasure weaves together stories of danger and romance, and of spiritual and artistic triumphs.

In India Treasures you will:

The novellas set in earlier periods are linked by a treasure hunt in modern times through the immense fortress of Mangarh by government tax raiders. Vijay Singh, the capable and conscientious leader of the searchers, battles a corrupt political boss who imprisons the Maharaja of Mangarh and preys on the lovely princess Kaushalya Kumari.

Vijay fears that in Mangarh his secret may be exposed: he claims to be of the high Rajput caste, but in fact he was born an Untouchable outcaste in a nearby village.

PRINT COPIES available through Amazon.com or by order through your local bookstore (ISBN 0-9707662-0-3)

India Fortunes: A Novel of Rajasthan and Northern India through Past Centuries

India Fortunes is the sequel to the historical novel India Treasures, which drew widespread praise both in India and abroad. As with the earlier book, a modern day search for a Maharaja’s legendary treasure weaves together seven novellas of major events and historical figures of earlier eras, bringing India’s rich history and culture alive.

During the treacherous times of the Emergency of the mid-1970s, the hunt resumes through the huge fortress of Mangarh for the remainder of the famous treasure, including the Star of Mangarh diamond, and for a fabled sword said to have belonged to the legendary King Shivaji.

Vijay Singh, the leader of the searchers, is again in peril of exposure as a secret Untouchable. The Maharaja of Mangarh remains unjustly imprisoned by a despotic government, while his daughter, the lovely princess Kaushalya, confronts the corrupt and dangerous political boss Dev Batra.

In novellas set in earlier times, readers will meet such memorable characters as:

A Novel of Adventure and Romance in Ancient India

Note: Elephant Driver is also included as a novella in India Treasures.
Although aimed especially for young adults, older readers also are enthusiastic about the tale.

E-BOOK version of Elephant Driver in all formats available for download for U.S. $2.99 through Smashwords.com and other e-book retailers.

Cama Beach: A Guide and a History

About the book on Cama Beach: